This webpage is being initiated due to an e-mail conversation with Werner Thote.

In late 2013, we inherited a bunch of devices of late Graham Wimbolt, among it a NS4 German night-fighter emergency transmitter.

It has been dealt with this artefact before on our website.

Though, my interest has been sparked again.

I razed the query: have you ever seen the according NS 4 Breast-mounting plate?

I went back to our Klooster exhibition and focused more on details I never had looked for before.

Considering the photos already available on our website, he draw already the exciting conclusion, that our set is of the oldest series he had ever seen.

Went back last Friday to the Museum and did shoot a new series of photos.

Werner Thote asked me, can you please, find a sign of a motor-driven SOS Morse module. The mounting space apparently is there, but no sign of a module.

After considering the sets known to him, it might have been, that such complicated miniature device never saw action. Whether is was regarded being: too complicated or not reliable enough; who knows? 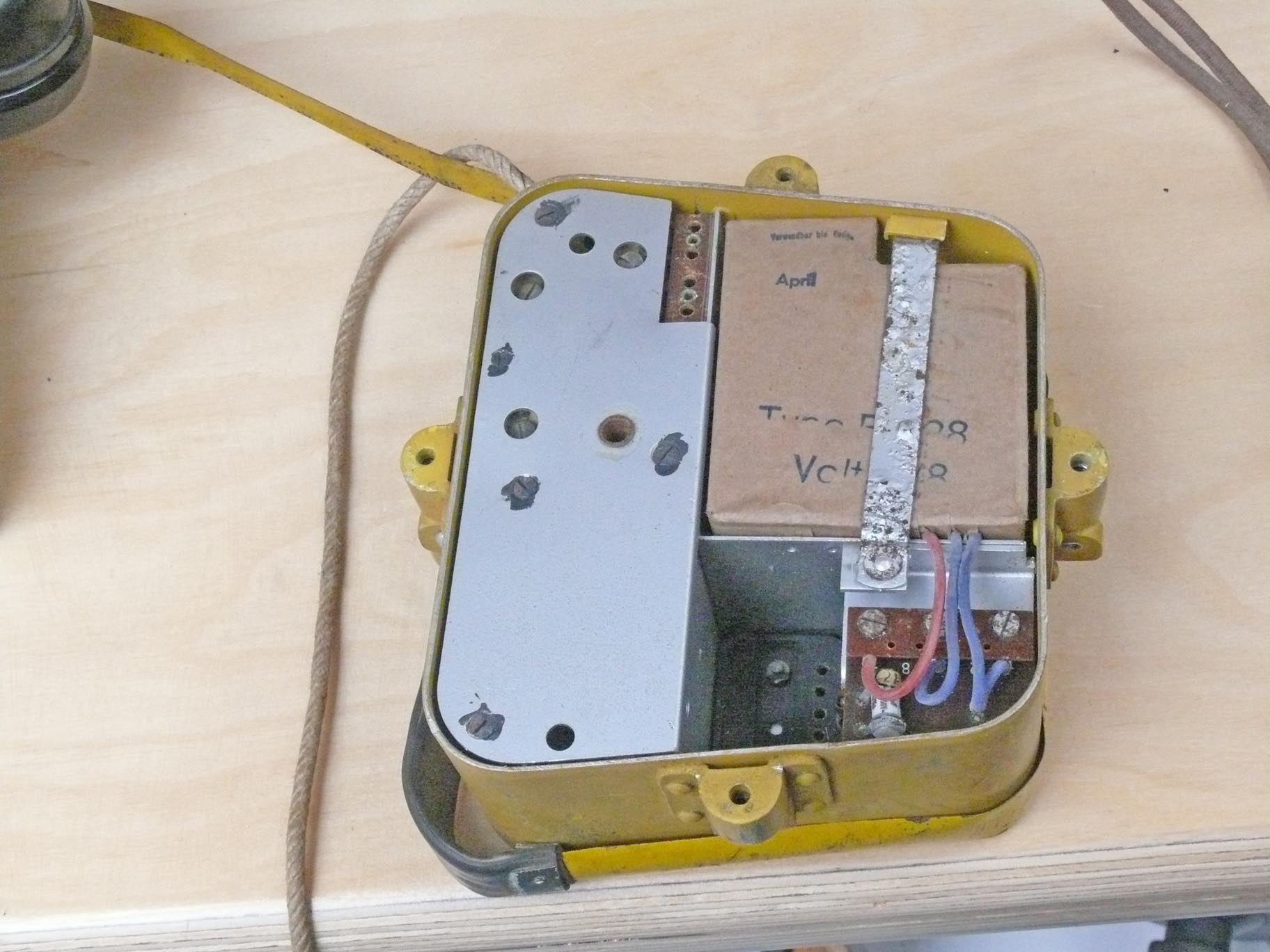 I have to admit, that I instantly approached it from inside

The SOS Morse-code-device should have been mounted in the free-space between the battery interconnections and the screened transmitter section. At the bottom there even is a connector provision.

I have to admit, I was quite astonished to notice that a genuine battery is included! 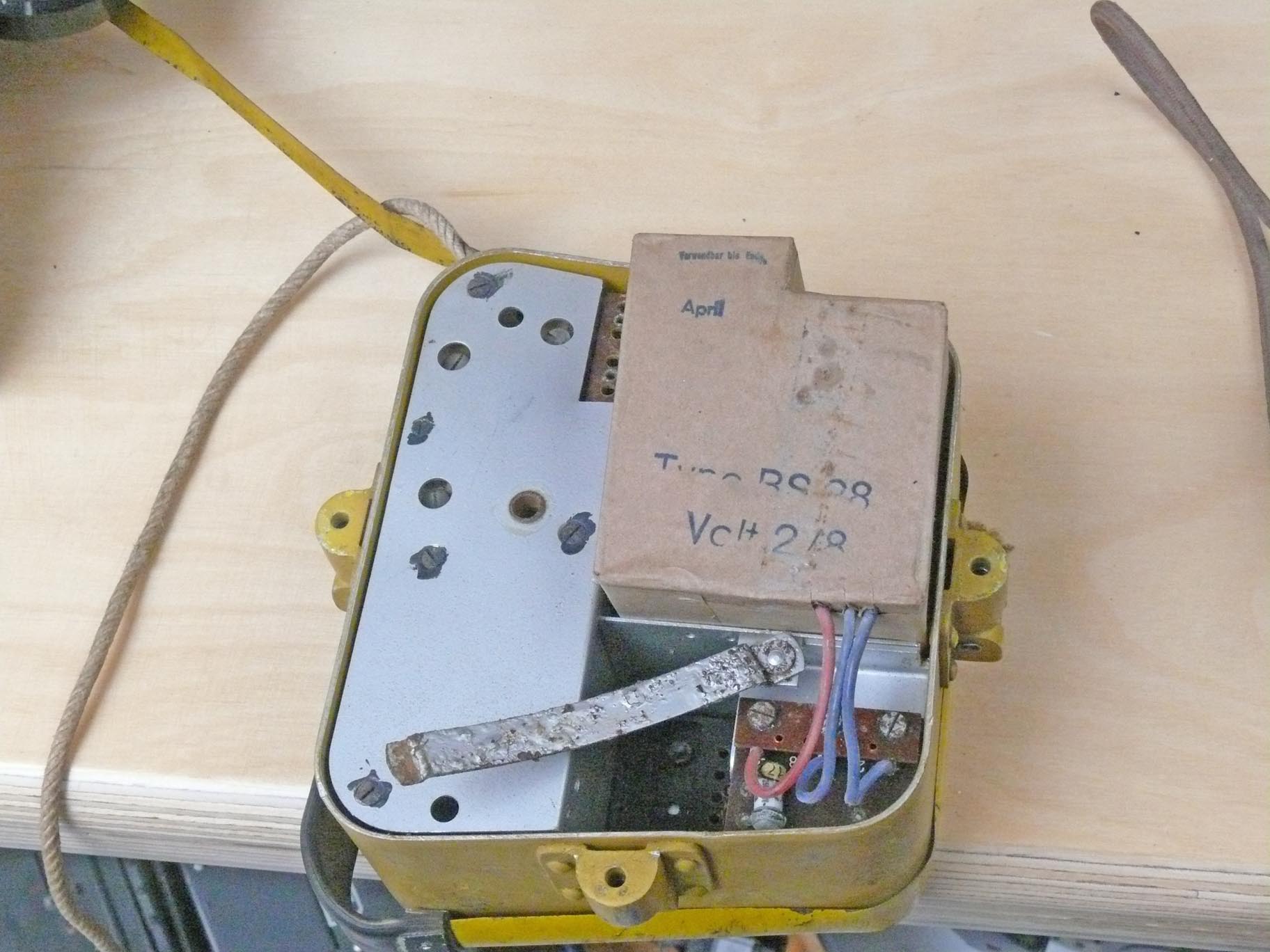 According to the printed battery information: RS 38? Volt 2/8

This evening, 27th January, both Werner Thote and JØrgen Fastner responded correctly that the type-number should be read: RS 28. This could make sense, as it contains 2 V + 8 V. My thoughts went to a virtual year of its principle introduction of 1938.

As being proved by a photo sent by JØrgen in which, without doubt, it shows on the battery type RS 28.

However, it doubtless concerns a genuine battery. In a sound paper-wound-package, without any sign of deterioration!

What astonished me, was when tacking it out of its space, its quite heavy weight.

This question was solved by Werner Thote's statement: that it concerned a "lead-acid battery" package.

Today, I received an e-mail from Werner Thote:

Therefore we should approach it next week again.

He noticed, that at least in DDR days, such lead-acid battery type had been on the marked. He doubt, that this will be the case nowadays. He noticed, that modern batteries will be easier to handle. 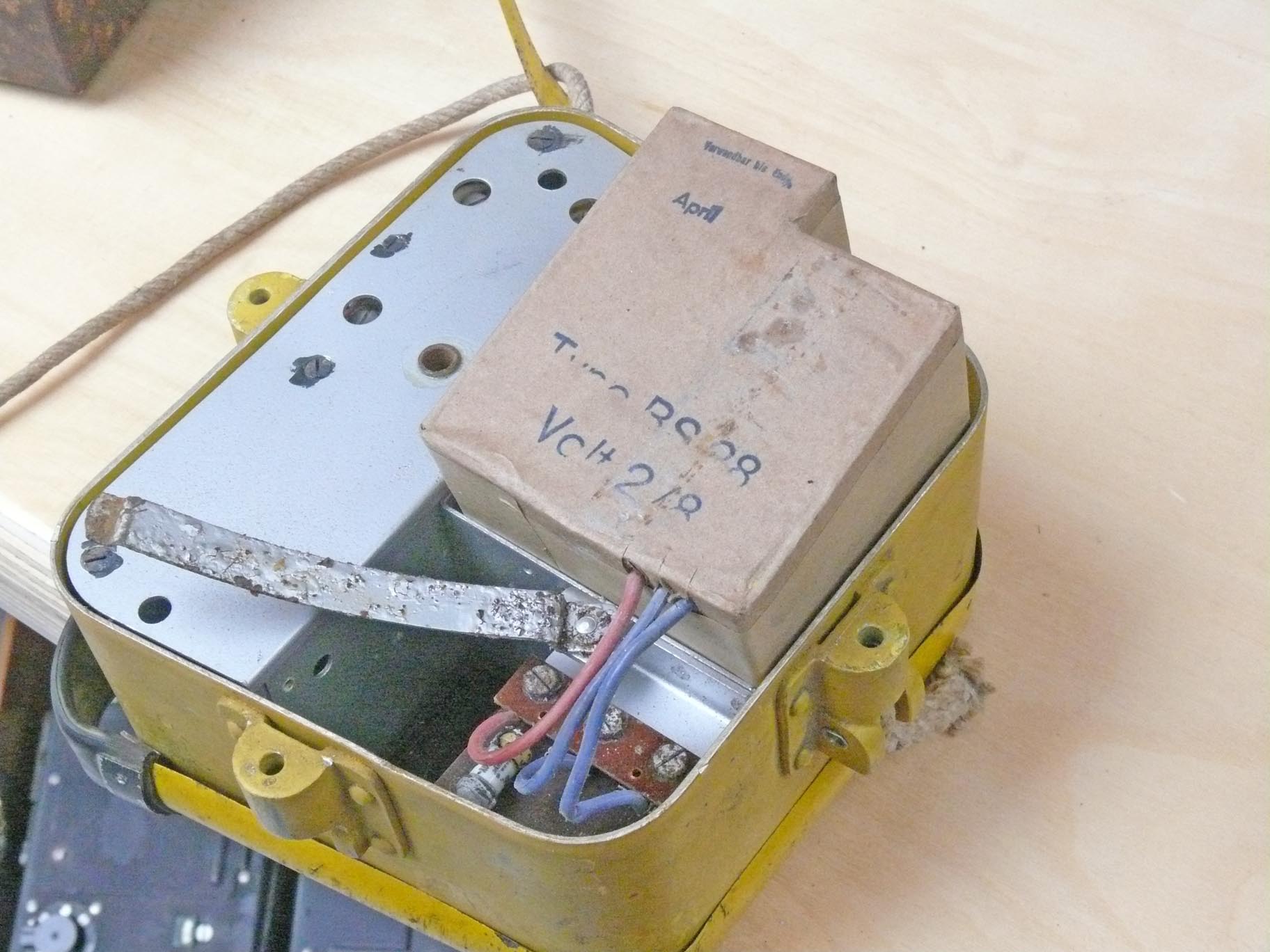 I took the package a bit out, but, sadly without taking additional photos. I noticed, however, that it was rapped within regular quite heavy packing-paper

When you look carefully, you might notice the sticking binding paper used regularly rapping packages.

Clear is also, that these products were, more or less, been assembled handmade. 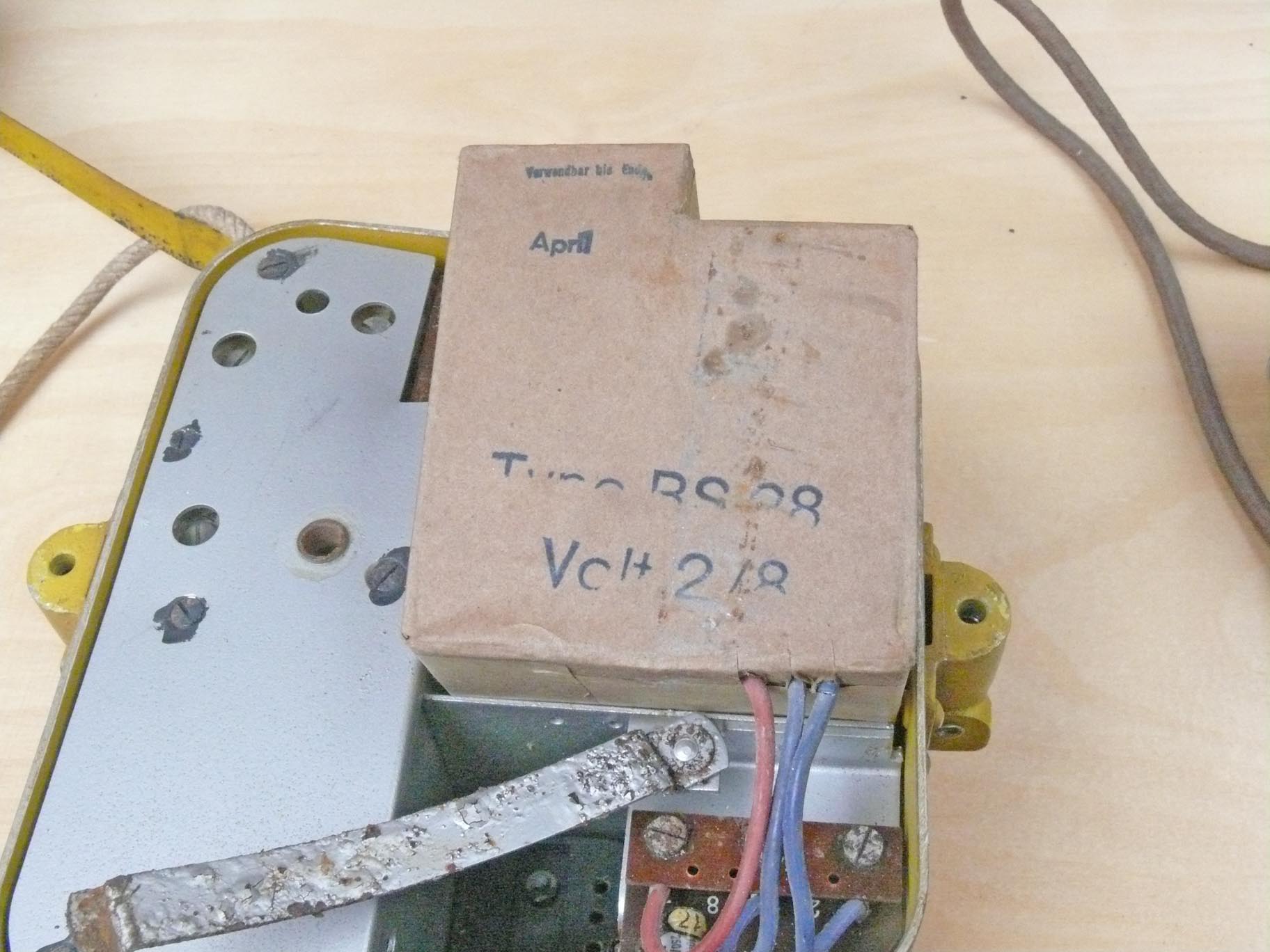 In my perception curious, is, the notion: "Verwendbar bis Ende April" 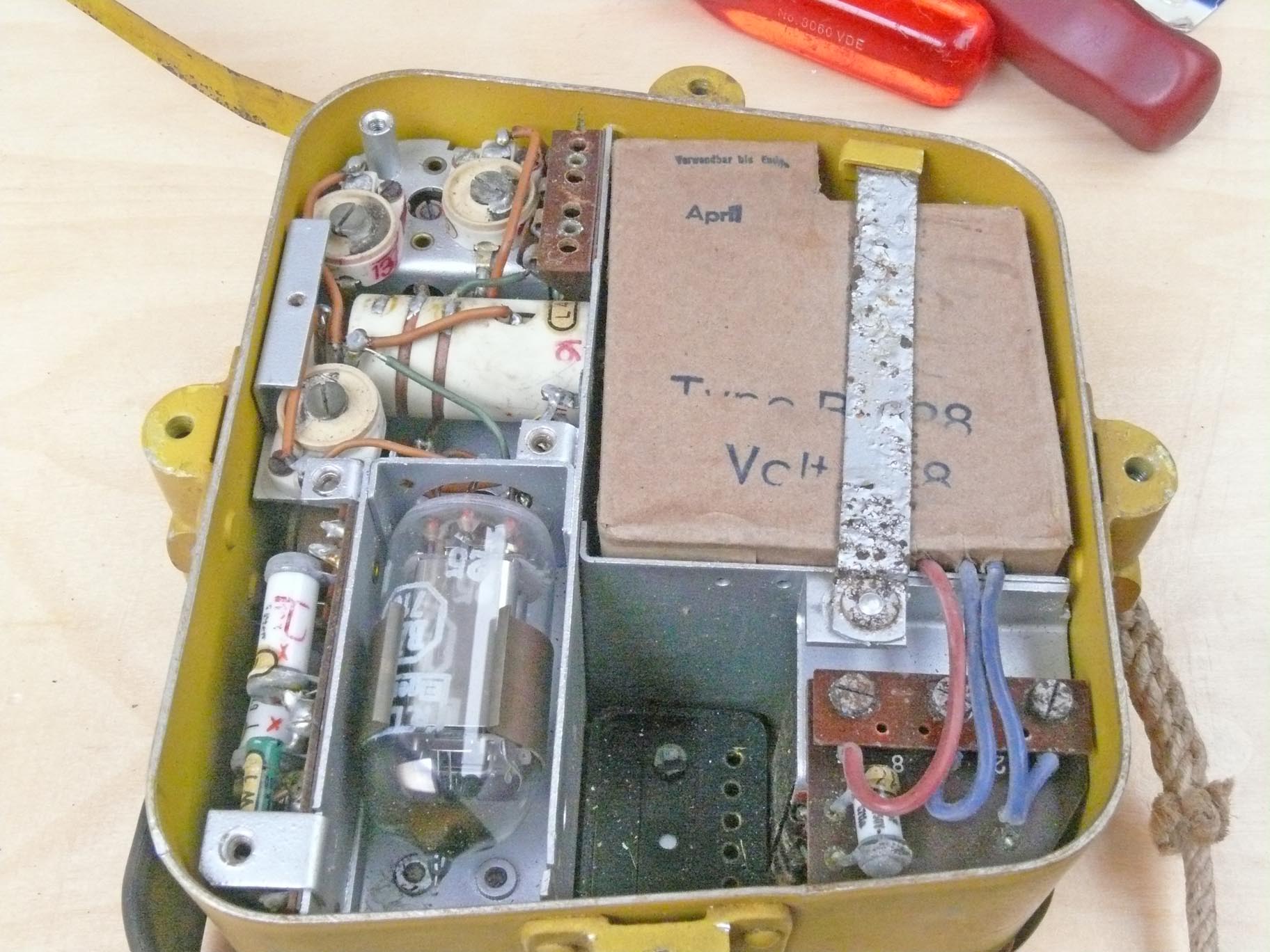 Nobody should say, that the German lacked an appeal of neatness!

Please look careful in between the red and blue wires for the two applied voltages (on the right 2 V and on the left-hand side 8 V).

The more or less rectangular space in front, should according an early manual being used for a "motor-driven" SOS Morse-code-keying device.

As such device have been never encountered, we may consider, that it never had been operated. 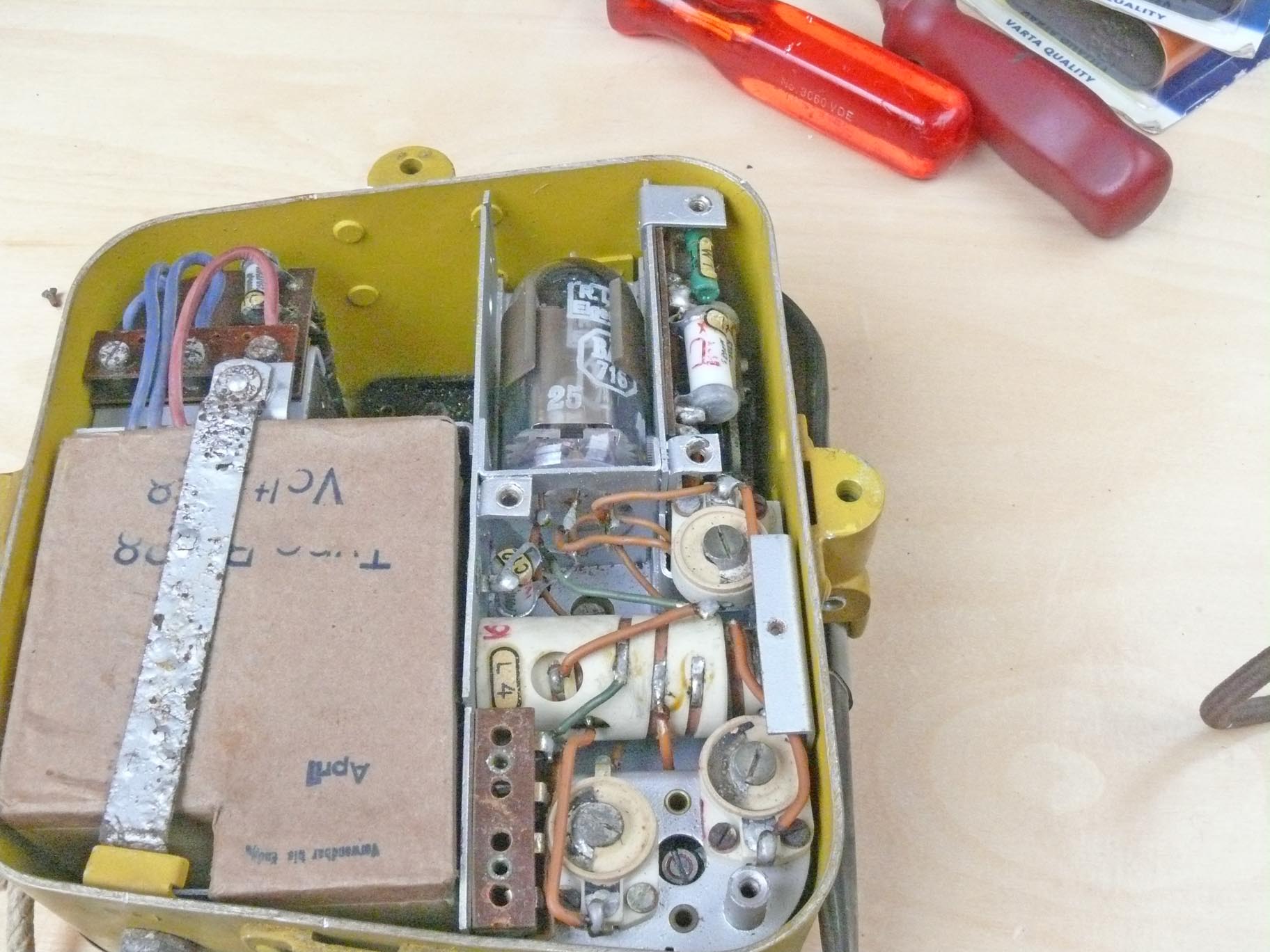 The relevance of this photo, is, that it shows undoubtedly that the transmitting valve once had been accepted on week 26 of the year 1941!

Werner Thote quite instantly pointed that it correctly should be red: week 25.

Reconsidering the foregoing, photo I got the not unlikely illustrious  impression of week 26.

Therefore, we may estimate, that our sample should have been brought into operation in 1941 or very shortly thereafter. But taking into account what being noticed on top of the battery package (translated): to be used up to the end of April. Therefore we may assume that was ment: April 1942. 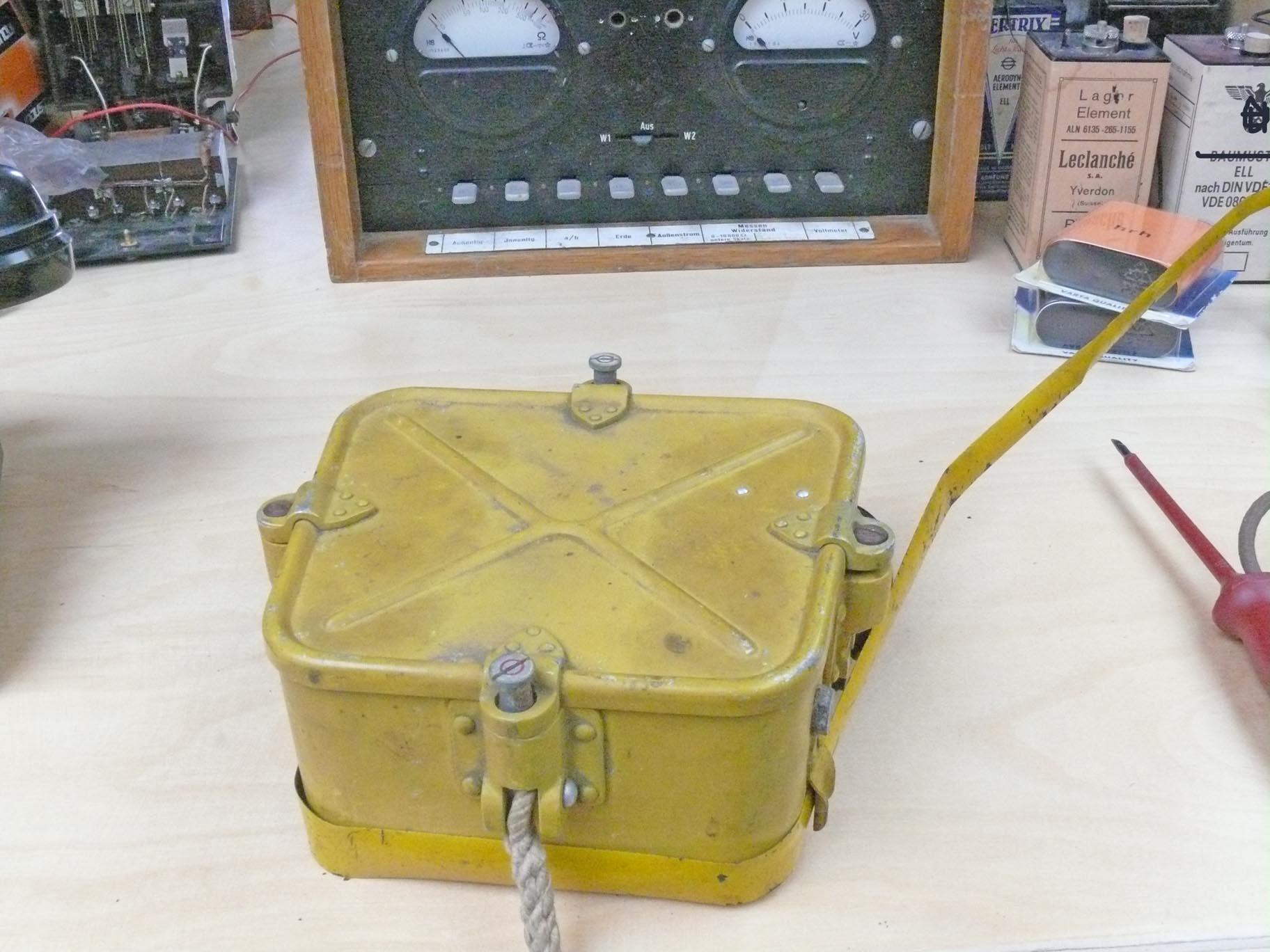 These later will be shown function a attaching screws fitting onto the Breast-mounting-plate. 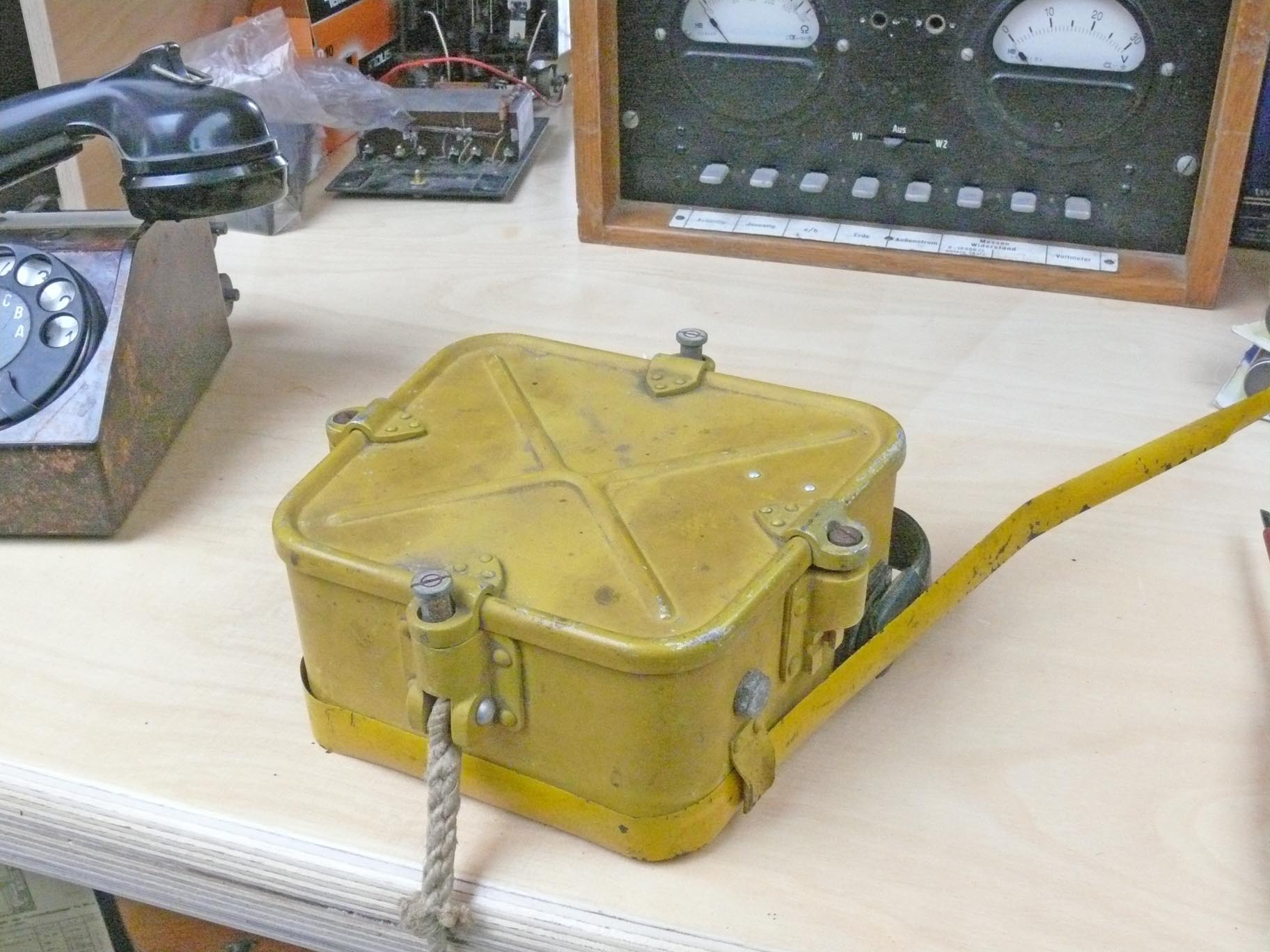 Viewing slightly from a different perspective, providing a better understanding 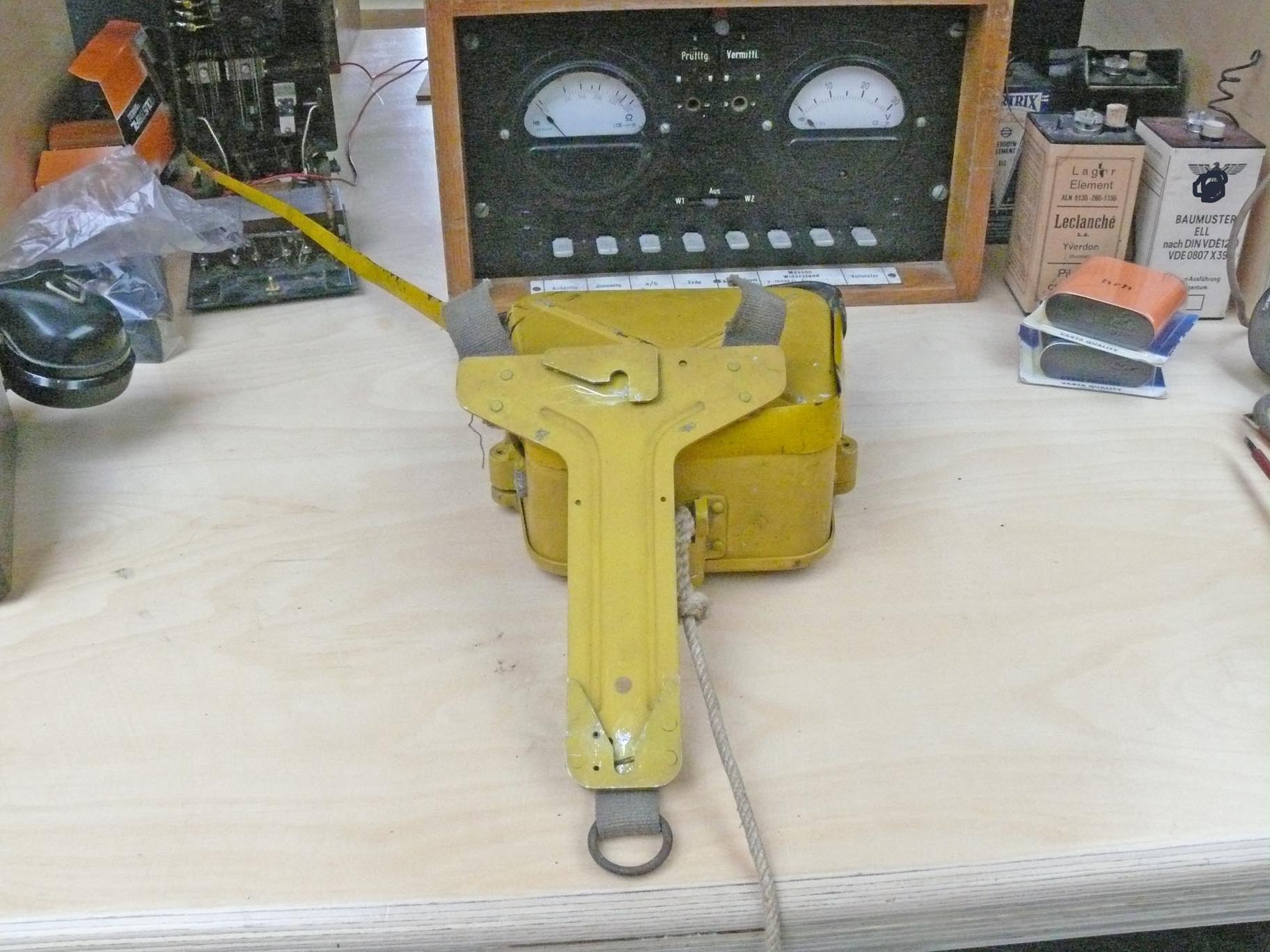 Please notice the spring-loaded wire in the lower slot facing towards us!

This spring loaded wire is pushing the system upward in the top locking provision. 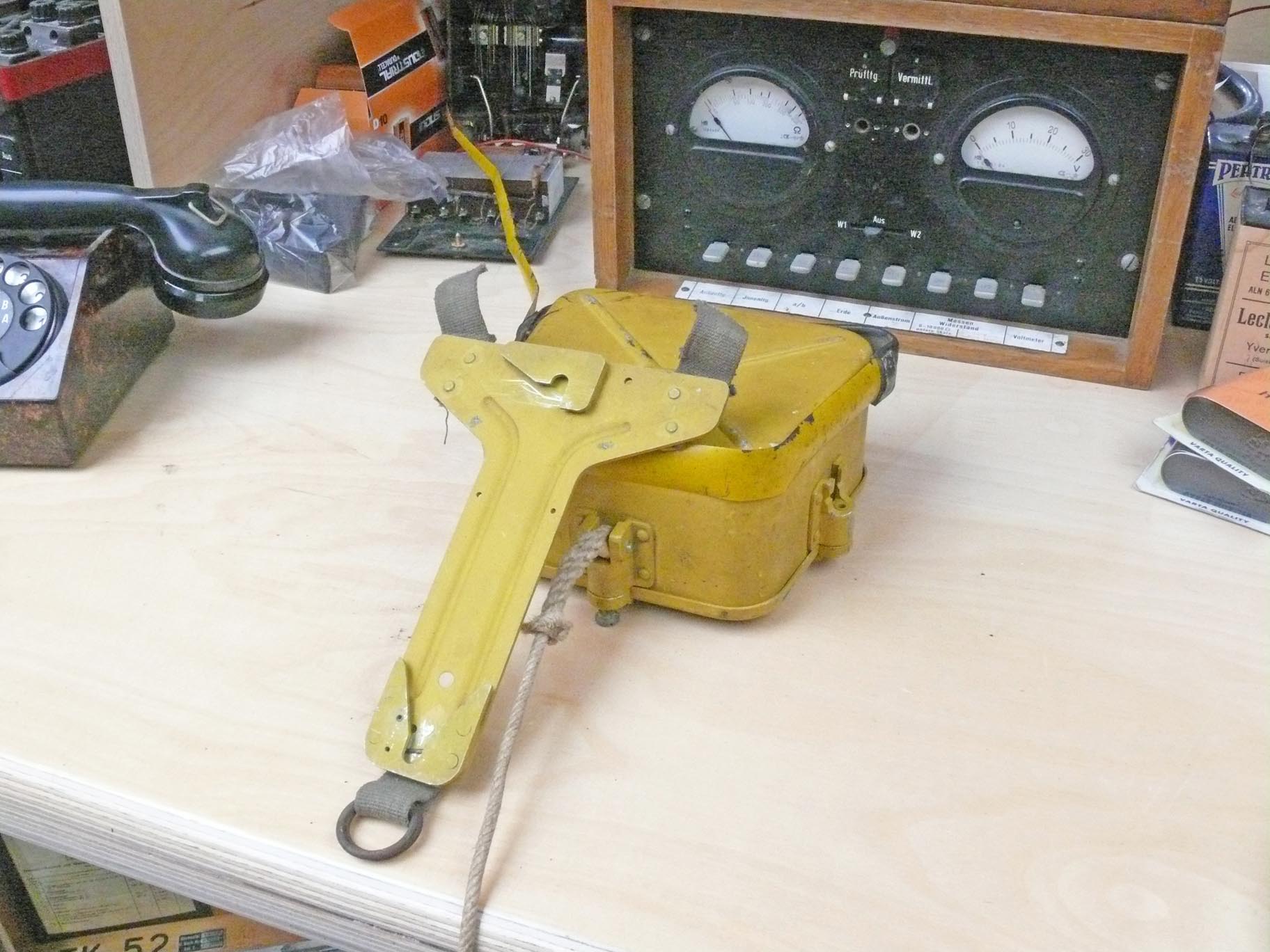 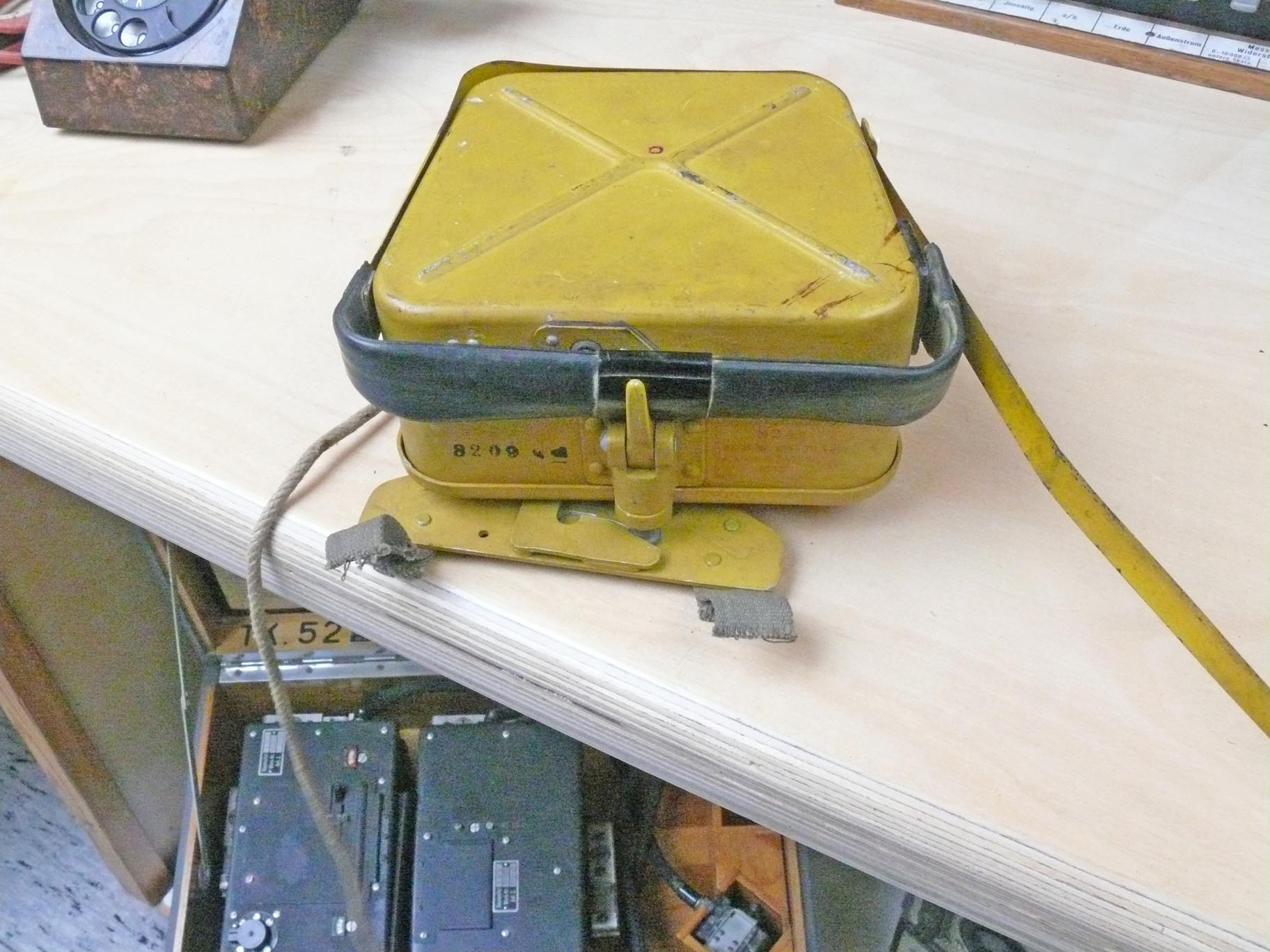 Please, imagine the NS 4 box being rotated clockwise, so that it can slip into its slot position 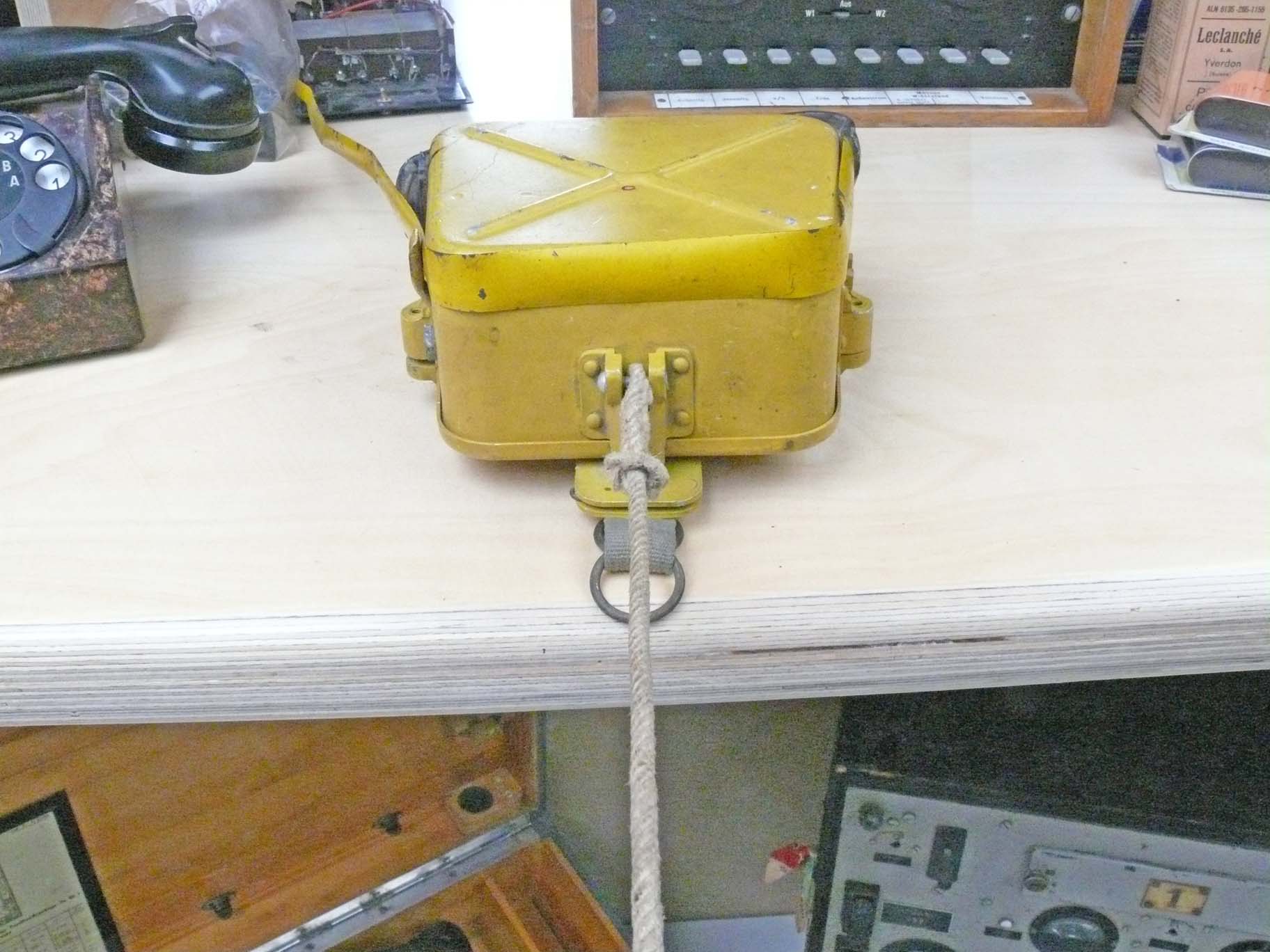 Pulling the cord, will force the NS 4 module to be pulled a bit downwards

Allowing that it can be rotated out-off its locking position.

I wondered during a telephone conversation with Werner Thote, that I felt the battery package was quite heavy. Werner told me, that in DDR days, these types were regularly employed.

To me still open, commercially or as a common product?

He, told me that inside the battery unit are implemented a series of lead-acid battery sections.

Measuring the sizes of the battery package.

On request of Werner Thote, we particularly have returned to the Klooster premises for considering unique battery pack more in detail. 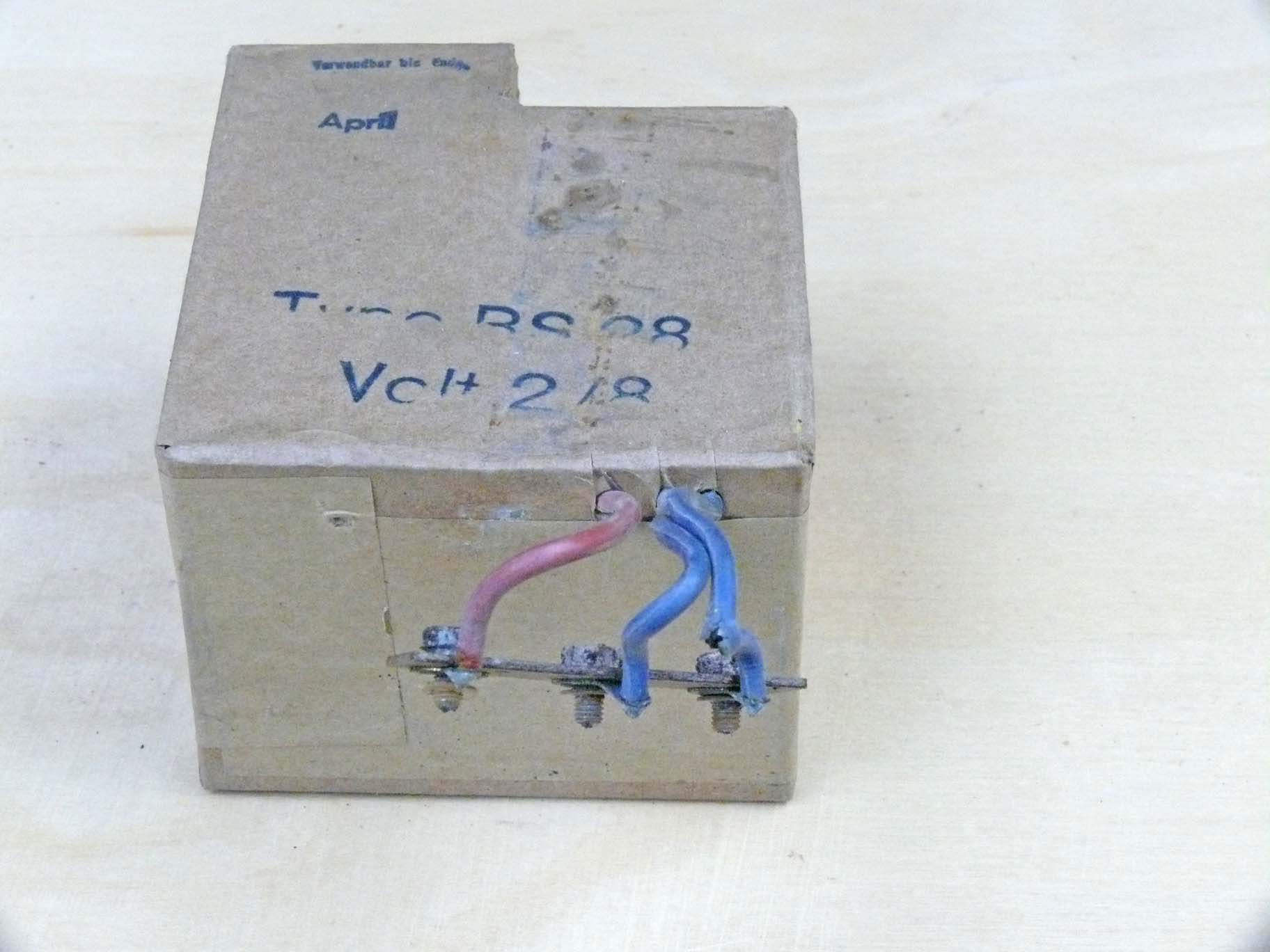 Battery has been detached from the NS 4 housing

The bright colours most likely pointing at the application of PVC insulation. A technique quite often used in German wartime GAF apparatus. 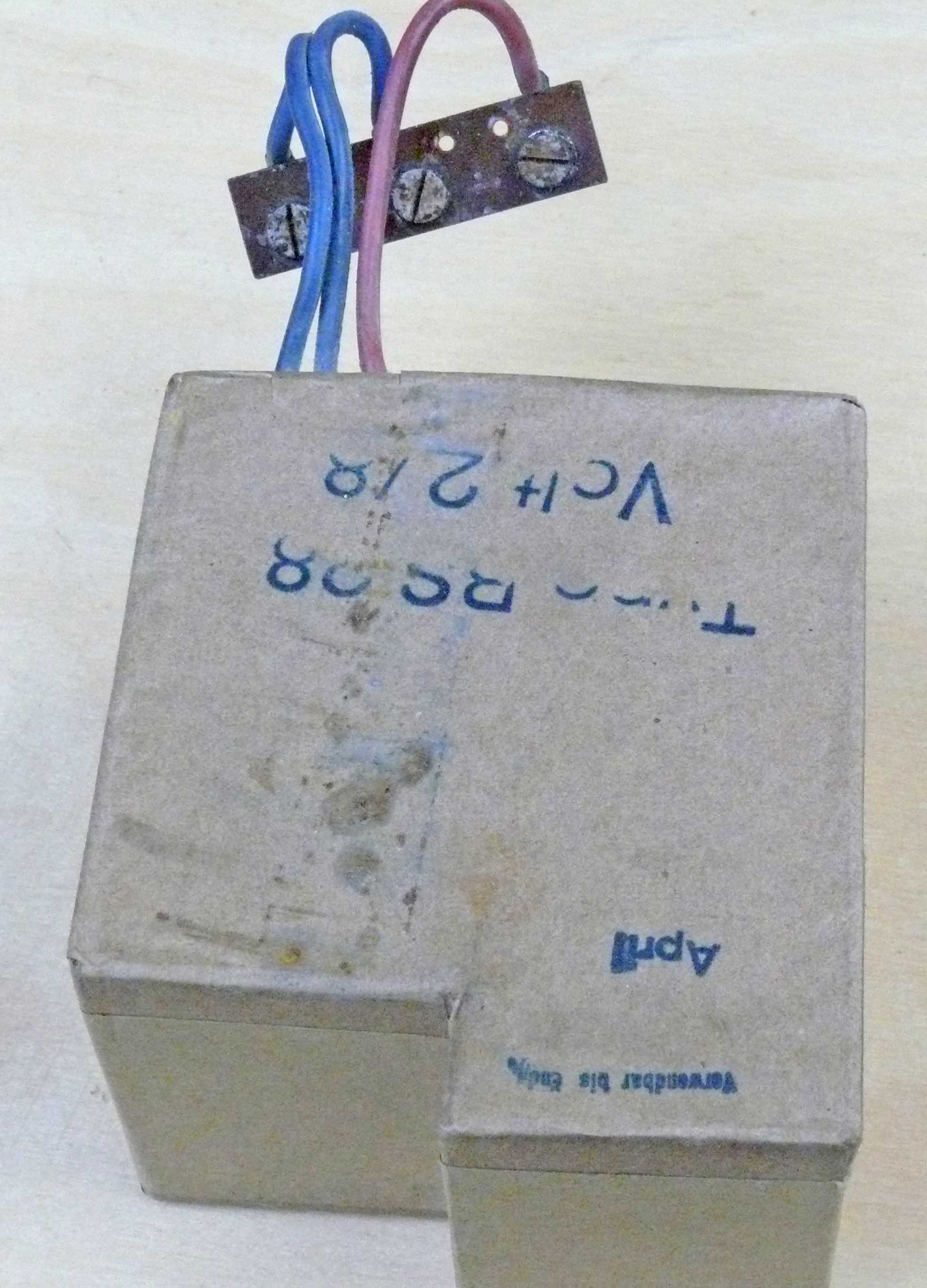 Viewing it just the other way around

Please notice the way the packing paper has been wrapped. 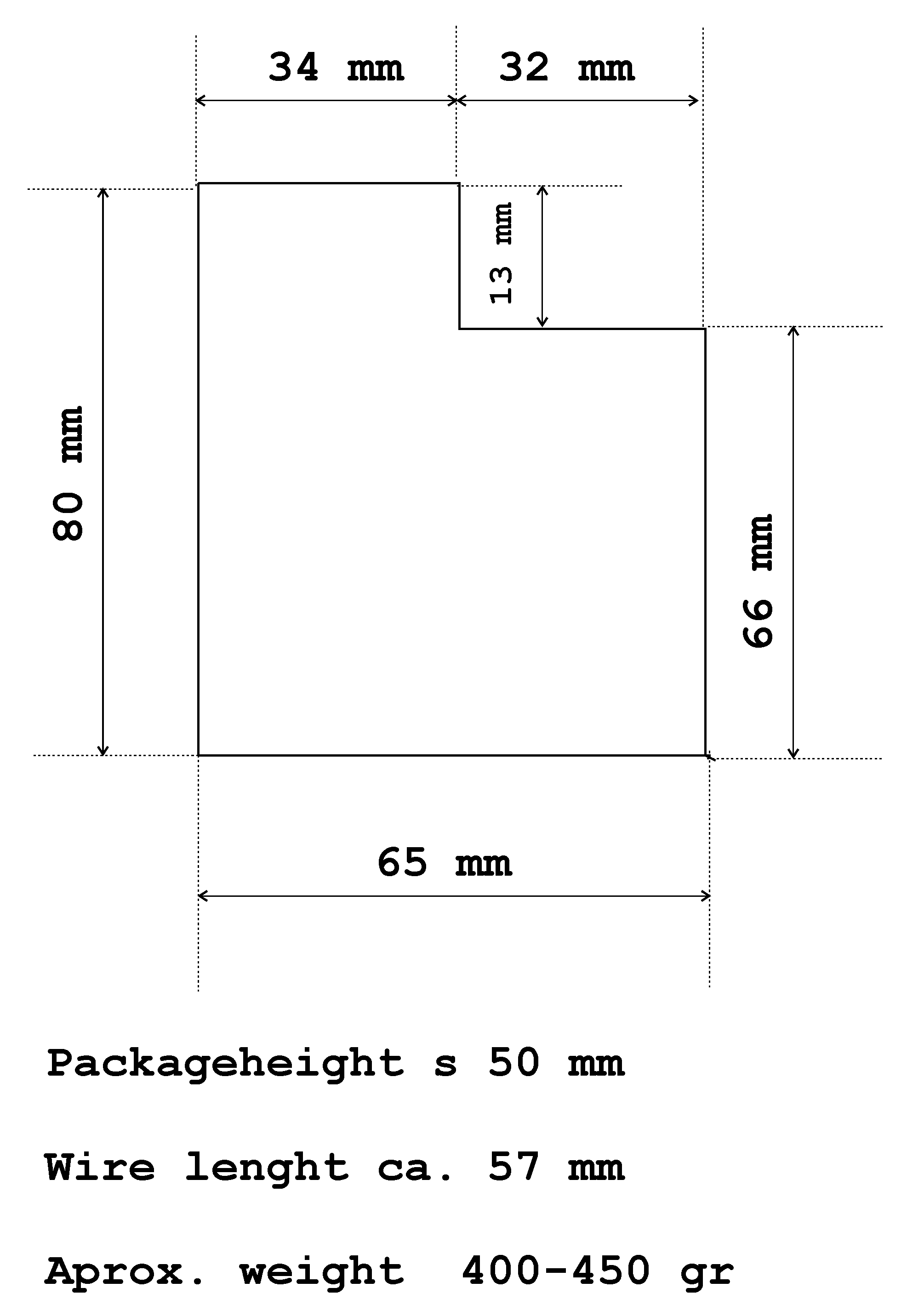 For some of  you of interest, I have drawn the measures of this battery pack; tolerances within about +/- 1 mm