Starting with the reconstruction of the adapted K 12 Kurssteuerung; gyro once operated in the mini-submarines type 127, carrying code-name: Seehund

The main part of the wiring on this table is genuine wartime; once obtained by Jan Deiman's father in May 1945.

I was, in October 2014, very happy to get the genuine wiring back. Now we have a real chance of restoring the operation of this intriguing equipment again.

All started newly, after a phone call from Jan Deiman in 2008/9. Telling me that he had to clear some space of his mothers, asking me whether I am interested in some K12 parts left?

Of course I was!

Having now an ultimate chance getting my own K12 system operational for the second time. However, I still was looking for additional bits and pieces. It took me six more years before I was able to obtain André Vèrgez's naval version of the adapted K12 including its genuine 1943/44 wiring; which before 1988 had been mine.

Most kind was that André Vèrgez did send me the manually controlled electrical steering device, shortly after I told him about the parts I got in 2008/9. I did ask him - whether he possessed a second Richtungsgeber Lrg 12? However, what he did was sending me the very device that was an integral part of the equipment I once swopped with him in 1988! 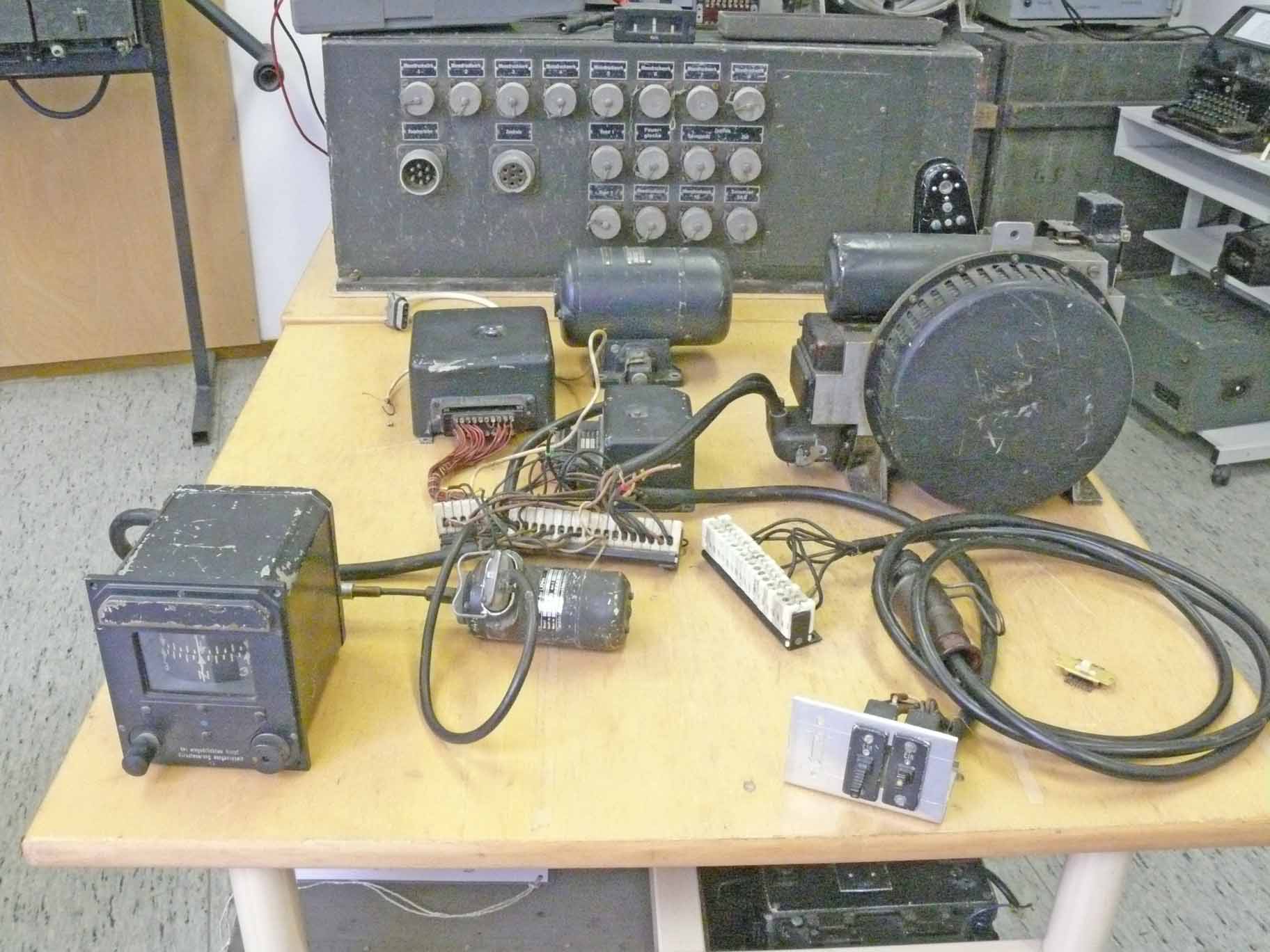 Viewing the genuinely adapted K 12. Viewing what should become its front panel

(please notice the 'blue spot' down the compass-scale, showing its naval application)

Next to the two switches we see the genuine steering device, known as Richtungsgeber Lrg 12.

Please bear in mind, that this system is a converted (adapted) aircraft gyro apparatus.

My guess. The German Navy in great need of many systems did not possess (in 1944) gyro systems of such small dimensions; they therefore adapted a widely available aircraft system. Its simple nature, wide availability, small size and light weight, might have been major considerations.

We would like to mount the entire system at a circular plate, allowing manual rotation. Like was done in the early 1980s when the system being active. A platform rotation will cause a deviation of the 'ruder-arm' attached to the 'Rudermaschine'; virtually tending to counter movement. In an active system, the difference between the course setting and the course represented by the virtual compass (which does not exist here) is determining the (progressive) ruder deviation.

In 1988, I swopped my first adapted K12 system with my good old friend André Vèrgez; which I obtained once from Jan Deiman, about 1979.

Accompanied with this apparatus was a hand written documentation, based upon very pain striking investigation; which I luckily did keep.

It is apparent, that he did work on it during several intervals in the 1970s.

Without Jan Deiman's documentation, I would not have initiated this new survey!

Our first aim, these days, is to lay hands on as much as possible sources of information. About 1980 I bought, from late Kees de Wilde, a bunch of photo copies (no Xerox copies) originating from the Library of Congress; which were real photo-copies on microfilm.

Among it, some dealing with K12.

What in our system basically is lacking (omitted), is the device down on the far left-hand side. This is a so-called damping gyro, which is countering irregular fast movements (deviations) of the platform, in casu, an aircraft.

Shown is a brief electrical diagram

Its principle relies basically upon a gyro combined with an 'order' or command setting. The course setting being done by the pilot, by means of a device mounted on the right-hand steering-arm; steering it by means of his thumb.

This principle schematic might give an idea of what the system is about, but ..

What to think of the next, a bit magnified, example?

Considering with some imagination the two most right-hand wires connected onto a switch, what are their actual connection-numbers?

It is evident, that working with such kind of fuzzy schematics is a burden. Just that is what it truly is!

Without Jan Deiman's documentation I would have been lost.

(Neglecting commercial advertisements of all sorts)

I did just this, the results were disappointing. Sometimes guided to our own website, then led to a website showing only a picture of the device. Quite pedantic information, but what one really necessitate is not being passed on. Most likely the person in charge is not aquatinted to real technical information. Who nowadays is?

The English language is not my mother tongue, and specific technical expressions are sometimes difficult to translate. I therefore consulted Jan ten Have, who has a penchant for British (wartime and post war) technology. The question arose, what is the English word for the pilot's steering facility in bigger aircraft? He came up with: steering column hand wheel.     mmmmm

Maybe it should be written: steering-column-hand-wheel; whether this is correct cannot be judged. The wheel is not what the word suggests a wheel or circular device, but is open, and having two ends; which are bent in such a way that it can be conveniently gripped by both pilot hands. His right-hand thumb is then, at will, steering his aircraft left or right by means of the gyro system (starboard or port, responding in either direction slow or fast); a combined switch allows switching on-off the ruder system temporarily.

According a nice German booklet: Wörterbuch des Flugwesens von K. Anders und H. Eichelbaum of 1939, they use the following description:

Let us continue with our survey

Viewing the 'Richtungsgeber' Lrg 12 from the wiring perspective. All insulations, but a brown one, are purely black. The purple shining is due to reflections originating from somewhere in the room

My camera is most sensitive to purple colour, even when direct reflection is not occurring. When somewhere in a room is such colour existing, even in a corner, our camera is picking it up and responding.

In a telephone conversation yesterday (Saturday 18th)  with Helwig Schmied, he very kindly gave me the cable connection numbers to our Richtungsgeber 127-268-B1. I was quite astonished, as these positions do not fully match with what Jan Deiman once did put on paper; the latter data proved formerly to be correct in our adapted K12 system. From this section it is clear that the switch contacts being connected onto Lrg12 connections 3 and 4, and not what Helwig Schmied forwarded on 6 and 7. My guess, we deal with two slightly different kinds of devices, although, their outside appearances are equal.

Additionally we consider some of my personal notes

I did check whether connection 3 and 4 does correlate with the position of the 'Ein - Aus' (on - off) switch; which apparently is the case.

Nevertheless, the only way determining what contact-number is interconnected onto which wire-end - is disconnecting each one separately; and labelling it. I prefer to label it twice at the same cable-end, one providing the Lrg 12 connection number and also giving the central strip-connection-number (S). Maybe a bit overdone, but very convenient later.

With the help of Jan Deiman's documentation this should be possible.

On Friday 17th after lunch, I returned to the museum again 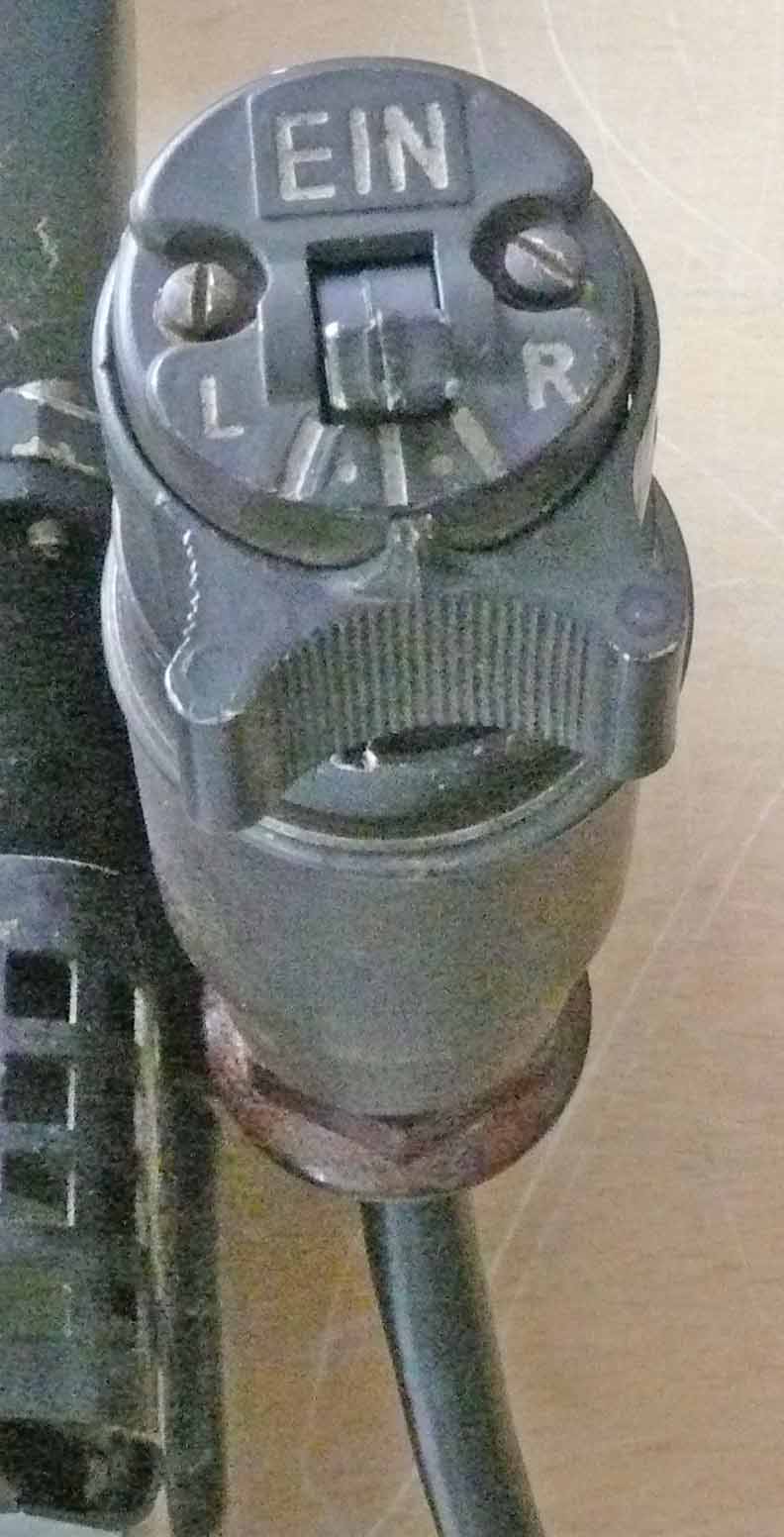 First photographing the appearance of the Richtungsgeber Lrg 12 in detail

The 'thumb grip is good visible. Please notice that the tube like provision was a naval adaptation.

Please notice also, that in the K 12 aircraft system the 'Richtungsgeber' was directly mounted on the right-hand top end of the steering wheel; no additional cables existing (because wiring went through the hollow steering wheel tube. In contrast, within the Seehund mini-submarine type 127 they operated a wire linked device. Mechanically and electrically both are further equal.

Viewing it from a bit different perspective

For practical reason, I mounted it somewhere on the outside of the hydraulic ruder-machine.

The hook was to hang it somewhere in the Seehund and might also have acted as a provision not to let it slip though the operator's hand.

The wiring being accomplished; the double labelling is clearly visible

Please bear in mind, that we deal with wartime wiring; which we would like to keep this way. What, however, might be necessary, is that the connectors are extended by means of cables fit with an extra pair of male and female connectors; leaving the wartime wiring as genuine as possible.

In the meantime a rotatable table is being made

Our aim is to allow easy rotation of the system and showing the interaction between course setting and actual bearing, forcing a countering movement of the ruder lever caused by the gyro system interaction. 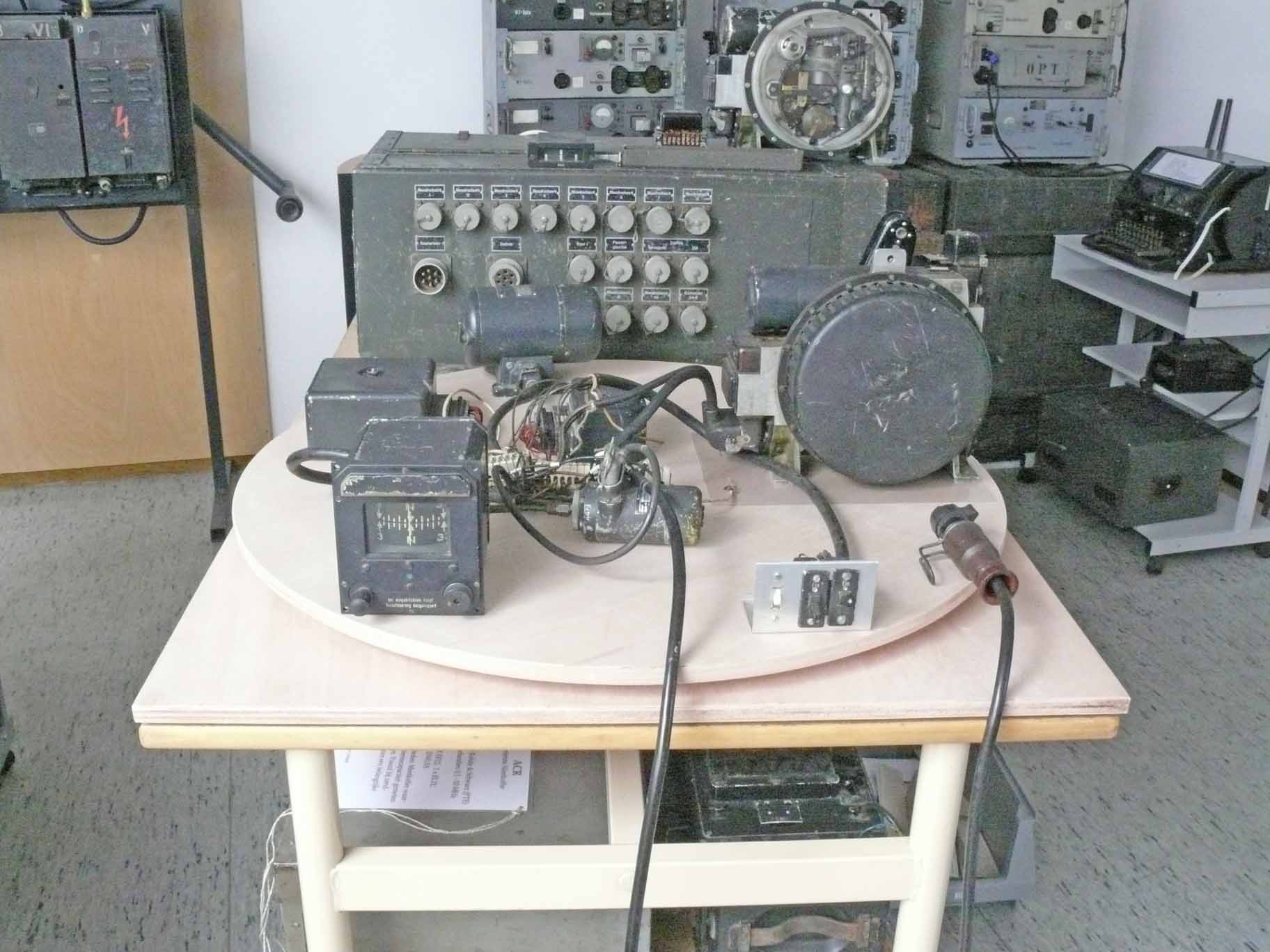 The K 12 being mounted (preliminary) at the newly made rotatable table, viewing it from what might become the front side

It is quite clear, that it might become necessary to extent wiring by means of extension cables.

Viewing the open so-called 'Mischgerät' 127-240 B2 (construction drawing number), Fl 22569-1 (stock number), which is a magnetic amplifier. Combing the quite many steering signals and eventually sending signals to the hydraulic ruder machine

Such 'Widerstandskasten' is a unit where the resistors are tuned and especially matched, as to fit onto particular system parameters. Thus, each box is particularly aligned onto a system  interacting with a moving platform.  The previously shown Mischgerät incorporated also a module (on the far left-hand side) which is adapted particularly onto the behaviour of the to be controlled system; mainly fit with special resistors (particular critical values). In gyro systems 'damping' is crucial. A feedback loop system generally necessitate particular provision as to minimise 'hunting'. Entire prevention is not possible. Have you ever been on a long distance flight and have you noticed that an aircraft wing is slowly moving up and down against the equilibrium of the horizon? This is a critical factor. Nowadays controlled by means of computers, but even then - feedback loops are concerned and its inertia is huge.

The three extension cables being made. This allows the reshuffling of the system on the currently existing rotatable disk. 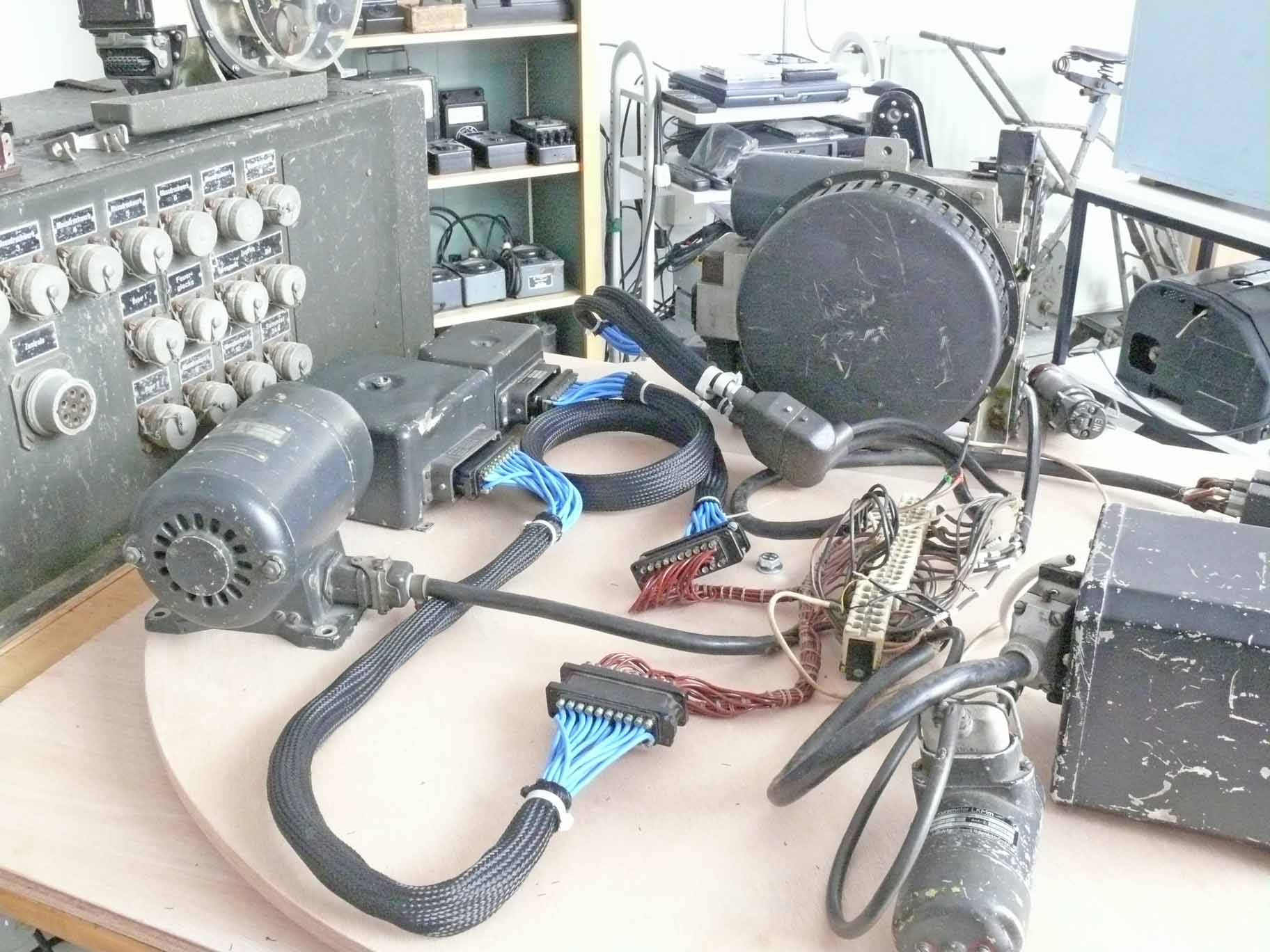 Viewing the implementation of the extension cables 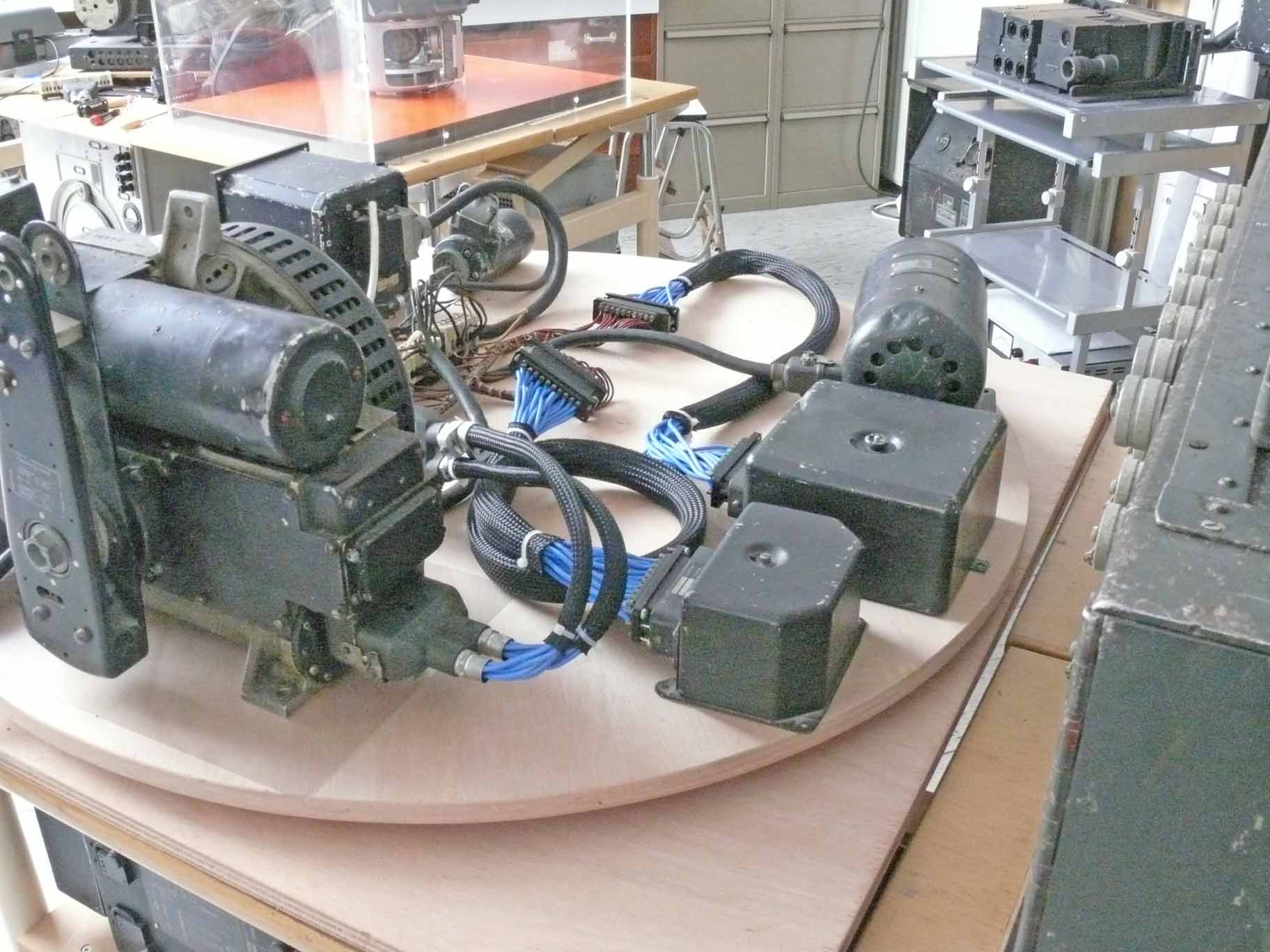 Viewing it from a different perspective

All extension cables being wired one-to-one. Consequently, these can be used universally.

Our next move should be checking the wiring again, using Jan Deiman's documentation as a guide line. Followed by checking the lubrication of the rotary converter. The Rudder machine (Rudermaschine) might be still OK as this was once taken care of by Cas Caspers in the early 1980s.

The next page is showing to us how it starts working again, after about 27 years of dormer