Please notice, that an extra 'Open Day' have been scheduled, which is to happen on 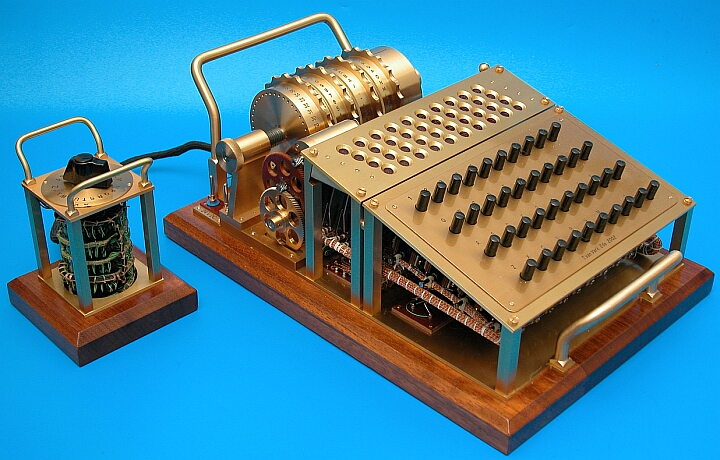 This morning I had a vivid telephone conversation with Tatjana Joëlle van Vark, the creator of most exceptional mechanical devices and systems

The current status of here machine is more comprehensive than what being reflected on this photo, as she has add an additional 'punch-tape-reader' in the meantime.

She supposed to demonstrate here machine during our Communications 2 event.

What a marvellous opportunity for all of us!

I first suggested, that we should find an appropriate Perspex (Plexiglas) cover, but she rejected it.

She herself would like to demonstrate here most wonderful machine; what a spectacular idea. She even told me, that under here supervision the attendees may operate the machine themselves!

I honestly believe that this has never happened before!

As to get it be known as fast as possible, I have decided to put this information on the web instantly.

And will add soon here after additional information.

For more photos of here wonderful machine please click at the the following hyperlink.

On the same Monday, I was able to add later that day, a series of photos reflecting the first stage of placing some of the 'secret communications 2' artefacts at its preliminary place.

However, it also becomes clear, that we have left quite some of our genuine collection in place, so that our special Secret Comms 2 exhibition is reflecting a mixture of German wartime gear, combined with a very rare range of crypto- as well as espionage related apparatus, of various origin.

Randomly starting with giving you a brief impression as to how we successively are building up the Secret Communications 2 exhibition.

Albeit, it that some might have to be moved (ultimately) to another exhibition spot.

ETCRRM was one of the first online/offline One-Time Tape (OTT) cipher machines (mixers), developed around 1953 by Standard Telefon og Kabelfabrik A/S (STK) in Oslo (Norway). It uses the Vernam Cipher and mixes clear text with random characters from a key tape, using electronic valve-based circuits. The ETCRRM was used from 1963 onwards by the US and the USSR on the Washington-Moscow hotline, until it was succeeded in 1980 by solid-state the Siemens M-190.

Once operated in the 'red-telex-line' between Washington and Moscow

The rather rare German spy-set type 98/3, taken out of its transport case

The number 98 points at the succession of design-number and /3 reflects its actual transmitter power.

On the top left-hand side the transmitter and on the right of it the receiver module; the powering batteries being stored in the lower section.

Maybe for some of you of interest: Rudolf Staritz explained me some time ago, that in their spy networks they operated in split-frequency. So that an operator can interrupt a transmission instantly; for example - when (some) characters being corrupt. Staritz told me, that one transmitted sometimes only a single dot, and the operator on the opposite side repeated his coded message instantly again (especially when he knew the operator). Without further communication! In practice it worked in a good fashion, as long as well trained operators were engaged. Most of Staritz wartime colleagues had a wireless amateur background! This is being confirmed in a British post war RSS summary, where they noticed: that quite many operators used HAM like abbreviations! Clearly reflecting what they had in common with their British counter colleagues!

Please notice - that the display has not yet been arranged fully.

On the far left-hand side viewing a British wartime spy set, the rest being Gladio related

The second set in succession is the most rare 1947 Dutch (Philips built) type OZ 47 set, once meant for 'Stay-behind' operations.

On the far right-hand side the spectacular 'Harpoon' FS 5000 set.

Please notice the elevated telephone carrying a green telephone-horn - is of the type once used by 'Winston Churchill' during this wartime days in his office!

Please notice that the exhibition is yet in its building up stage.

The heavy gear will be brought-in next.

As to continue following the building up of our exhibition, please notice the next webpage:

Please notice, that for security reasons, the displayed Enigma machines will not be left within our Museum premises outside exhibition hours!

This page being continued at: